This is Peng Chao from China. He is just an ordinary teenager aged 19 years and a fan of the game League of Legends.

One unusual thing is, it doesn’t have arms, but it might be a better gamer than you.

This is indeed, not the first time that gamers with disabilities have done extraordinary things. But this Peng Chao story is worth listening to.

When Peng Chao was six years old, he played outside with his friend. They played too close to high voltage power lines, and Peng Chao was finally hit by an electric shock that threatened his life. After five operations, the doctor was able to save his life – but both arms had to be amputated. Despite this difficulty, Peng Chao learned to do everything with his feet: eat, drink, study, and even play games.

And for gaming, Peng Chao played pretty well. In the League of Legends game, he is currently ranked Gold, which has become an achievement for many gamers. But when his classmates discuss this, Peng Chao usually responds with: “There is still Diamond above Gold.”

Nobody can stop him or criticize him. He has even become like a legend in his class in terms of playing LOL and in looking at life positively.
Recently, Peng Chao was busy with a college entrance exam (Gaokao), where he managed to get a high enough 538 (considering he wrote essays with his feet). We hope to meet him in the future when he reaches Diamond.

If he can do many things, why can’t we?

And you know, that there are unique charitable organizations, where they pay attention to people with disabilities, such as Peng Chao.

This organization originated from the United Kingdom under the name SpecialEffect. They are here to help sufferers of physical disorders to get a better quality of life. What are they doing? Helping people with physical impairments who are mostly children to play games. 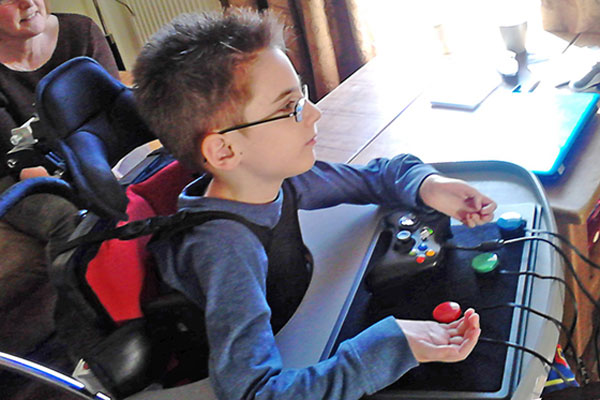 Special Effect itself is arguably a small organization because eleven people only manage it. Also, the organization that was established since 2007 has been increasingly visited since video games have become something that children with physical disabilities want. Initially, this organization started its activities not without difficulties, but with good effort and determination, SpecialEffect began to be known in video game communities. The Schafer Team (Secret of Monkey Island) also supports through its donation at Gambitious.

Seeing this can be done in developed countries such as the United Kingdom, it might be somewhat difficult if the same activities can be done in developing Asian countries, especially in Indonesia. Although awareness of equality between people with physical disabilities and the general public is growing, these sufferers are still often underestimated. This is indeed reasonable considering the economic, social, and technological conditions in Indonesia itself are not as advanced as in other developed countries.

So far, I have never found a similar organization in Indonesia that specifically helps people with disabilities to play games. But if this can also be realized here, isn’t that an extraordinary thing? Games for everyone!